With every passing time, technology moves one step forward. In the developed world or “rich world” as  Bill Gates would put it its recent advances in genetics and gene editing has led to some tremendous progress towards helping people in the developing or “poor world” especially in places like India and Nepal where medical costs are high.

Bill hacked into the computer world with the invention of Microsoft and BASIC (Beginners All Purpose Symbolic Instruction Code) which was the first operating system that ever got into mainstream personal computers. 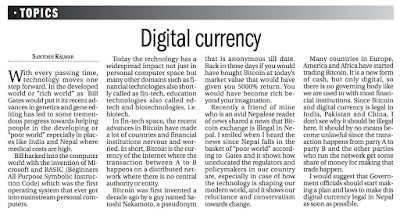 In fin-tech space, the recent advances in Bitcoin have made a lot of countries and financial institutions nervous and worried. In short, Bitcoin is the currency of the Internet where the transaction between A to B happens on a distributed network where there is no central authority or entity.

Bitcoin was first invented a decade ago by a guy named Satoshi Nakamoto, a pseudonym that is anonymous till date. Back in those days if you would have bought Bitcoin at today’s market value that would have given you 5000% return. You would have become rich beyond your imagination.
Recently a friend of mine who is an avid Nepalese reader of news shared a news that Bitcoin exchange is illegal in Nepal. I smiled when I heard the news since Nepal falls in the basket of “poor world” according to  Gates and it shows how uneducated the regulators and policymakers in our country are, especially in case of how the technology is shaping our modern world, and it shows our reluctance and conservatism towards change.

Many countries in Europe, America and Africa have started trading Bitcoin. It is a new form of cash, but only digital, so there is no governing body like we are used to with most financial institutions. Since Bitcoin and digital currency is legal in India, Pakistan and China, I don’t see why it should be illegal here. It should by no means become unlawful since the transaction happens from party A to party B and the other parties who run the network get some share of money for making that trade happen.

I would suggest that Government officials should start making a plan and laws to make this digital currency legal in Nepal as soon as possible.