Should Writers Respond to Their Critics?

Getting a bad review is no longer an elite experience. We’ve all been trolled, oafed, flambéed in some thread somewhere.


To answer the question directly: No, no, a thousand times no. A writer should not respond to his or her critics. A writer should rise above, in radiant aloofness. Sometimes that’s not possible, of course. I was drinking with a friend in London when he spotted, on the other side of the bar, a man who days before had reviewed him cruelly in a national newspaper. My friend grew agitated. “I’ll punch him in the face!” he said. “No, wait. I’ll buy him a drink!” He paused. “What should I do?” He had no idea, and neither did I. Aggression, under the circumstances, seemed quite as promising/­futile as magnanimity. I don’t even remember what he did in the end. The point is: You can’t win.

“Sometimes you are the pigeon,” Claude Chabrol said, “and sometimes you are the statue.” Wonderful, Gitane-flavored words. But we are not statues — we are not made of stone. Anointed with guano, do we not feel it? And right now everybody feels it. Getting a bad review is no longer an elite experience. Writers and non-writers, mandarins and proles, we’ve all been trolled, oafed, flambéed in some thread somewhere, at the bottom of some page. Scroll down, scroll down, take that Orphic trip into the underworld of the comments section, and there they are — the people who really object to you. Their indignation, their vituperation, is astonishing. It seems to predate you somehow, as if they have known and despised you in several former existences. You read their words and your body twitches with malign electricity. You must get out of this place immediately, run toward the light. Let the dead bury their dead. And don’t look back — because if you do, like Orpheus, you’ll lose what you love the most.

What are the avenues, anyway, whereby the writer can respond to the critic? Letters to the editor are hopeless; they always sound either querulous or insane, with horribly writhing syntax. And swatting at each other on the Internet does no good; round and round you go, in a troll spiral. You can make the critic a character in your next novel and give him hemorrhoids. You can talk loudly against him at parties. Or, rarest and most blessed of all, you can pay attention. In his memoir, “Prince Charming,” the great poet Christopher Logue, in mellow old age, dives into “a chocolate-liqueur box filled with dated clippings of every review that my books, plays or radio programs had received since 1953.” He makes a discovery. “How differently they read now. At the time, oh, the complaining: That fellow failed to praise me for this, this fellow blamed me for that. . . . Now, how fair-minded their words appeared, how sensible their suggestions for my improvement.”

But there remains that feeling — that feeling of being misunderstood and misused. That subtracted, sad-child feeling. You may be wondering how it is that I, who have written derisive and destructive reviews of books I considered not good, who have taken pains to make public, in as amusing a way as possible, the inferior qualities of this or that author, can be so terribly thin-skinned. Is it the case, you ask shrewdly, that I can dish it out but can’t take it? To which I reply: It is absolutely the case. I can dish it out endlessly, and I can’t take it at all. I believe I share this characteristic with most members of my species.
I’m learning, though. We’re all learning. The hatchet job, at the dinner table or in print, is a decreasingly admired form. So to the authors I have injured with my criticism, I say this: Your book may not have improved, but my moral qualities have, slightly, and I regret the pain I caused you. And if we happen to meet one day, punch me in the face and buy me a drink.

Posted by Mybheja at Saturday, December 20, 2014 No comments:

So what happens to your most prized possessions online such as social media sites; e.g., Facebook, Google+, Instagram, Twitter, etc. after you die? The quest to answer this question has been haunting me for weeks and terrifying a friend of mine who is addicted to it. She spends around seven hours a day on these sites. She wakes up, eats, sleeps, and breathes—the Facebook. So after my friend’s death (who is now hysteric, I will be able to ‘post’, ‘comment’, and ‘like’ her status from school days. And, what would she think if I post something nasty on her wall? Right now, she thinks that it won’t matter because she will not be there; therefore, she will not care. A few decades ago, people were merrier listening to one national radio station, and most conversations happened by reading real faces. Nowadays, however, the digital society appends more complexity and disorder. In the present climate, everything real and personal happens on Facebook or social media sites in general. 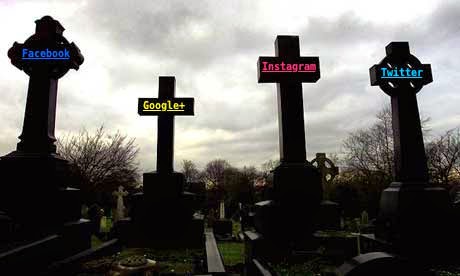 According to the Huffington post report, 30 million Facebook users have died since 2012. People live as though they have another life stored in a safety deposit box of a bank. However, it is good to constantly remind oneself that our time is limited and it is good not to waste time on Facebook. After death, we won’t be here to watch our real or virtual melodrama, but we may contemplate ahead. Don’t worry. The Facebook provides two simple solutions: a) your account will be deleted permanently based on your family’s request; b) your account will be converted into a memorial profile. The Facebook will change your profile settings, and only friends would be allowed to post on your wall. But, nobody will be allowed to log in your account; not even your family members.Though digital footprints are extremely difficult to erase, it is still frightful that Facebook will keep your profile active, even if you are no longer here to use it. In other words, Facebook won’t delete your account without notification by your family members. Additionally, not all sites on the Internet have implemented a death policy for their beloved users. Therefore, it is solely up to the family members to decide and provide death proof and documentation to these popular sites.Time is ticking, and your online twinkling is limited. Thus, if you have something important in your mind, do it now. You might not get a second chance, after all. Consequently, what happens to my friend’s most prized possession; i.e., the Facebook after she dies? The Facebook will serve as a virtual graveyard to mourn from anywhere, anytime.