Press Releases: "Yet another book of poems"

Mr.Santosh Kalwar has published book with new project entitle, "Yet another book of poems" published by Lulu.com, This is the Seventh book/e-book written by Mr. Kalwar.

Currently, The book is free to download in an free e-book version from publisher lulu.com 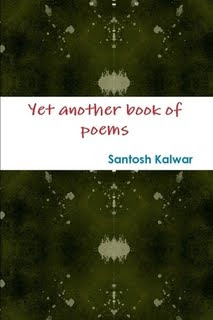 Here is the complete press release


Mybheja congratulates the author for his new book !
Posted by Mybheja at Sunday, November 15, 2009 No comments:

Labels: 2009, i am legend, i am satisfaction, life kalwar santosh kalwar, poem

Please don’t scratch your head with these above symbols. The first symbol is meaning, Hello in Arabic, the second symbol is the same hello in Hebrew and the final one, you probably recognized it.

Based on these three different languages, we have three different religions. These are: Judaism, Islam and Christianity. No offence to anyone who belongs to this religion or any other religion. The message is simple, “Hello”.

A human is intellectual mind. A single mind can think, create, share, and collaborate among other human mind. How would it be without language? A Hebrew man could not possibly talk with another Hebrew man if this Hebrew man does not know how to speak his own language. In my naïve understanding of the language, I would define it as a symbol for exchange of thoughts or ideas among peers. What if a Hebrew wants to talk with Christian? What would be the consequences if Christian do not know the language of Hebrew and the Hebrew man does not know the language of Christian?

Do you think could they still be able to talk? Probably, yes! But maybe in increasingly difficult ways; now the question one should ask to oneself is, what if one of these men has some very big problem and one need help of other, otherwise another will die. What is the moral value of being a human being? Will you able to still understand the emotions of the suffered men forgetting about his religion and beliefs. Some human being will and some will not.

Today, In fast paced individualistic world, everybody wants to grab an attention. Be a hero or an icon, a leader with huge followers, Gurus and even different religions.
Let us jump to another situation, this Arab man and Christian man both love their religion, they are both going to die for their religion. What if both are in trouble? Let us say, they will get out of this trouble if they help each other but they do not want to share their ideas and thoughts. How would you respond in that situation? Will you shake hands to Christian? Or, Will you shake hand to Muslim or Arab?

Let us go back and think once again, aren’t we human first? Or are we Hindu, Hebrew, Christian and Muslims first?

The lives in 21st century, A time which is just an illusion. The calendars which are all our imaginary creation, the language which we developed long time ago to share out insights among our community and group of people; the maps which we designed to share our territory

Everything appears to be divided. The divisions are among our religion, country, politics, consciousness and language. We have come to the time where we live in the world where we have to make an instant decision. We are just making decision at every instant. The world is at war of race, religion, politics, economics, people and many other elements.

The time has come to open up our mind and explore deeper understandings of not our own narrowed world but also every world. The time has come to show that even if you are Hebrew or Christian or Muslim, to collaborate and share the insights and ideas to save the planet.

The real awakening is at our sunrise. The real death is not limited with our humanistic time but with our thinking and intellectual insights. The time has come to love each and narrow the differences among each other.

We do not need to know what we have to do when we feel deep inside us to help someone in trouble.

Until and unless the bigger trouble much larger than the problems facing human civilization in current practice comes to us, we are not going to see our “true human feelings” for fellow human beings. The time may come which will show us for collaboration but before that time, we all need to help each other from the natural calamities and hatred world which we are creating.

Let us say, No to war, let us say, No to stupid politics or religion. Let us grow together for peaceful world. Let us begin together the new birth of human consciousness.
Posted by Mybheja at Saturday, November 14, 2009 No comments:

I am an alien in the Neverland

I am so sorry to write this article but I must write it. Let me introduce you, who I am? Well, I am Ted Nelson. I am currently in Neverland, the developed, number one country in the world.

The good part of my story is that, I am living a stub-born life with good job and my sweet dreams.

The problem is I was living in Neverland with illegal status. I was called as an alien. I don’t know what that means but it really hurts when the officer calls me, “an alien”. For God’s sake, why am I being called an alien? I am just asking a simple question, not to that officer and not to the politicians or diplomats who make stupid useless rules and protocols but just to me. Why am I being called an alien?

What is wrong with the people nowadays? Everybody is being anxious about terrorism, being black, does not makes me criminal? What is wrong with the color of skin? I have been discriminated number of times and I am not going to talk about it. The rules of society are not flexible enough with the intellectual growth in human population. There has been no upgrade or change of the major rules. Once they were made laws, they have remained law forever. I am feeling so pity for the next generation, how are they all going to deal with these stupid man made laws? I have number of question in my head, countless of them but none of the authorities have satisfying answer to my simple questions. Yes, it is sad that I have to go back to the place I belong but I wasted all my life working for this country, Neverland. Now, when they don’t need me, they are throwing me. A human life has become useless. It has become like garbage, there is no value for living.

Ted Nelson said, “I am not an alien in Neverland, Sir". The officer said, "Yes, that is what you are, a third world alien, you have no rights to live in developed world like ours. You must go back to your country." An immigrant replied, “I have lived here for 30 years and now you are sending me back, anyways, thank you, even if I am called as an alien, I am proud to be an alien rather than immoral alien."
Posted by Mybheja at Thursday, November 12, 2009 No comments:

/Quotes of the day

-No one can please everyone and not everyone is pleased by a single one.

-Even God could not possibly please all of his disciples how can human please other human?

-We can motivate other human, we can teach other human and we can embed moral, ethical and social dose for paradise but we can never make them satisfied.

-Life is not in showing who you are to others, life is in learning from others who you could be.

-Let us decide to jump from the mountains and fall into the lakes, because if you will fall in lakes there is higher chance that you will die, it is also obvious that if you will not jump you are going to die, so do what you always got to do.

God bless you all !
Posted by Mybheja at Wednesday, November 11, 2009 No comments:

why are we sad if we have to grow old
let us have fun without showing
our body
even though, it might look like shot gun

gym for physical fitness is good
over gym is for fools

no man is healthy except his thinking
we are once young, then older
then we become again, a child
cycle continues till we are alive

not only physical
but also mentally

just look back and enjoy
every bits of it


More about Randy:
http://en.wikipedia.org/wiki/Randy_Pausch
Posted by Mybheja at Wednesday, November 04, 2009 No comments:

Labels: 2009, how to live a life, life kalwar santosh kalwar, my bheja

Today is Halloween
All saints day
I look like saint
Who never had bright day
I am too old now
To show my energies
Love is only what I do now
Everything else is my allergies
500 miles I did travel for you
All my energies are lost for you
I have nothing to mourn
Just wish you happy and bright
Halloween day, to churn
Posted by Mybheja at Sunday, November 01, 2009 No comments:

We shared a good time
We loved each other at bad times,
Life needs sacrifices
I know you will find
Your prince at some sight,

May you be happy
May you be smiling as you did
Let me be nobody then
I don’t wann anything except
Your sweet charming delight
Your smile which is brighter like
Moonlight
Bless you with sun light
May you get happiness
My only life
Posted by Mybheja at Sunday, November 01, 2009 No comments:

I didn’t do anything wrong
Never killed any insects all along
I don’t know if you will ever come
But I wish you happiness
Forever, with anyone you will find
At your lounge
Posted by Mybheja at Sunday, November 01, 2009 No comments:

Forget me too soon

I am not alone too
I have your memories
To get me through,
I will wake up someday in you
Even if you will forget me too soon
Posted by Mybheja at Sunday, November 01, 2009 No comments:

I will live no more
I will forget you no more
You made me smile
You made me cry
But life seems empty
Without you, my wife
Our journey is on different road,
Nobody knows if we will see
Anymore
But, till my last breath
I will wait for you, my soul
I cannot forget those golden
Rosy days, my love
You may kill me in your heart
I will never kill you in mine, my sweetheart
Posted by Mybheja at Sunday, November 01, 2009 No comments:

You will live with me

I am not poet,
I am not singer,
I don’t have job
To linger
I am just a lover
As simple and ordinary
It could be
I don’t know anything
Except to love you
Till I live forever
You will live with me
Posted by Mybheja at Sunday, November 01, 2009 No comments:

for your love, O love

Life falls apart without you, love
I am lonely and my silence cries
Bleeding heart and bleeding soul
Our journey stopped before it was sure
In the middle of nowhere
I am not missing you
I am alright to smile
And I know
You will live in me, forever
Journey can break heart
But my heart still cries out loud for you, love
Maybe I need patience to heal
My lonely heart which cries out
For your love, O love
Posted by Mybheja at Sunday, November 01, 2009 No comments:

I loved you, I will forever