My time with Kale

Oct 18, 2015- The mayor of Ratnanagar Municipality was riding down the street in his black sports utility vehicle. He ran over my dog, Kale.

After the ceremony, I walked back to the city. Of course, I was depressed. I started to think about how I had first met Kale. It was seven years ago, when he was a puppy. He was like a baby. He never complained. My father had a fondness for Kale, too. He was such a captivating dog—my new dog, a fine great one with a black tail, delicate ears, a rich texture, charming eyes and a wilderness of patchy colours that lit up in his body like sunshine.

He was like a member of the family; we loved him and petted him. No one tried to give him a new name like ‘Tiger’ or ‘Rocky’ or ‘Hunter’. Friends and relatives even started to call me ‘Kale ko ba’ (‘Kale’). I suspect that they were just trying to rile me up and show some type of dominance. I didn’t care so much. My name was not Kale, after all.

The servants in our house were all kind to me and were fond of Kale. So, as you can see, mine was an easy life with Kale around. My sweet little Kale, my “very dearest puppy”, as some people would call him, made my happiness perfect.

My time with Kale began on a hot Sunday in summer. I was at a Chitwan cricket ground—perhaps playing in a district-level tournament between Ratnanagar and Narayanghat.

Father had gone to Kathmandu to see some of his old friends, and when he returned in the evening, he bought a surprise gift for my little brother, Dhorji. We children had never contemplated getting a pet, and our mother had never liked the idea. So when I went home in the evening after winning the game against Narayanghat and celebrating a bit with friends, I saw everyone in the family talking to a Kale. They were uttering words like, ‘Kale aija. Chu chu, Kale’. I asked Dad why he had brought home such a small dog and whom it was meant for. Dad didn’t respond. I had been late in arriving for the doggy party that evening.

The next morning, I saw Dhorji playing with Kale. The previously unknown dog had already been given a name by Dhorji and Father. So I was left with no choice but to call him Kale. I don’t know why Dhorji, who is just five years old, so enjoyed gathering his phucchhe friends and giving Kale stuff to eat and play with. He and his friends even smiled and touched Kale’s body without hesitation. I don’t know why phucchhes are never afraid of anything, but even when they got a bit closer to Kale they would shout aloud, which must have terrified Kale.

Dhorji was allowed to keep Kale in his room most of the time. I wasn’t even allowed to touch Kale—Father always reminded me whom the dog had been bought for. ‘He’s not your toy,’ he said angrily. So it was not my toy, but somehow I felt deep affection for Kale, and he felt the same for me. I still remember when my grandfather died. Kale was around then, and people could not believe that he had stayed in Aryaghat and never, it seemed, intended to leave. It was the talk of the town, and people gossiped about Kale (‘Kukur’), saying that he was very loyal to our family. There were hundreds of mourners at my grandfather’s funeral service, and Kale ambled up to near the funeral pyre and lay down next to it for seven days. 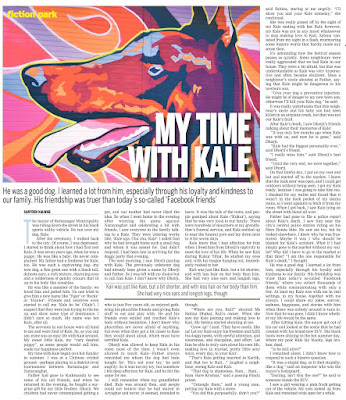 Kale knew that I had affection for him when I freed him from Dhorji’s captivity to meet the love of his life. When he saw Kali during Kukur Tihar, he studied my eyes and, with his tongue hanging out, immediately rushed to her.

Kali was just like Kale, but a bit shorter, and with less hair on her body than him. She had very nice ears and longish legs, though.

“Where are you, Kali?” shouted Ms Sabina Dhakal, Kali’s owner. When she saw my Kale panting and making love to Kali, Ms Sabina started shouting at me.

‘Grow up!’ I said. ‘They have needs, like us! Let my Kale enjoy his freedom and fulfil his doggy needs, with careful attention, and awareness, and discipline, and effort. Let him be able to truly care about his own life, making love in myriad, pretty little sexy ways, every day, to your Kali’.

“That’s Kale getting married in Kartik, and that too to Kali…” laughed a neighbour, seeing Kale and Kali.

“Untangle them,” said a young man, pelting my Kale with a stone.

“You did this purposefully, didn’t you?” said Sabina, staring at me angrily. “I’ll show you and your Kale someday,” she continued.

She was really pissed off by the sight of my Kale mating with her Kali; however, my Kale was not in any mood whatsoever to stop making love to Kali. Sabina vanished from my sight in a flash, murmuring some bizarre words that hardly made any sense then.

It’s astounding how the festival season passes so quickly. Some neighbours were really aggravated that we had Kale in our house. They were a bit afraid, but this was understandable as Kale was very hyperactive and often became ebullient. Once a neighbour’s uncle shouted at Father, saying that Kale might be dangerous to his newborn son.

“Give your dog a preventive injection. He might be of danger to my new-born son; otherwise I’ll kill your Kale dog,” he said.

It was really unfortunate that this neighbour’s uncle and his baby son had been killed in an airplane crash, but that was not our Kale’s fault.

After Kale’s death, I saw Dhorji’s friends talking about their memories of Kale:

“It was only few months ago when Kale was with us, and now he is gone,” said Dhorji.

On that fateful day, I put on my coat and hat and started off to the market. I knew that the back door was open, and I could get outdoors without being seen. I got my Kale ready, because I was going to take him too. I checked for my wallet and found that it wasn’t in the back pocket of my denim jeans, so I went upstairs to fetch it from my room. When I got back, I saw Kale lying on the street with blood all over. Father had gone to file a police report about Kale’s death. I saw him near the city’s central police station riding on his Hero Honda bike. He saw me too, but he looked elsewhere. I knew why he was frustrated. Maybe it was I who should be blamed for Kale’s accident. What if I had simply gone to the market without my wallet? Why did I have to go to the market at that time? “I am the one responsible for Kale’s death,” I thought.

He was a good dog. I learned a lot from him, especially through his loyalty and kindness to our family. His friendship was truer than today’s so-called ‘Facebook friends,’ where you collect thousands of them while communicating with only a few. At least my Kale was with me in real settings, in my house, together with me always. I could share my jokes, sorrow, sadness, happiness, and stories with him when there was nobody around to turn to. Now that he was gone, I didn’t know whether my life would be the same.

After hitting Kale, the mayor got out of his car and looked at the scene that he had created with his brand-new SUV. His black boots were shining in the hot summer day, where my poor Kale lay bloody, legs broken, dead.

“Is he still alive?”

I remained silent. I didn’t know how to respond to such a bizarre question.

“It was a stupid dog, so it died stupidly, like a dog,” said an inspector who was the mayor’s bodyguard.

“Darling, isn’t this the one?” he said to someone inside the SUV.

I saw a girl wearing a pink frock getting out of the vehicle. My eyes looked up from Kale and remained wide open for a while.