OCT 23 -
Cricket is always regarded as a gentleman’s game. This mental attitude is very important in the game of cricket; this is the game of battle played with both hearts and minds. This game, of bat and ball is Australia and England’s national game. There is no doubt that has become like a religion in India. And if cricket is has become a religion in India, then obviously, Sachin Tendulkar is the god of the game.
I have been great fan of Sachin from my childhood days. I have loved the way he bats, fields and bowls in both one day and test matches. If anyone has ever played cricket then they must be aware of the great Sachin Ramesh Tendulkar. However, the cricket game, in particular is bigger than any personal legend or name. I have learned that no game is won individually. The team effort plays a vital role in the success or failure of the game. Nevertheless, it does not matter if we lose or win the game, what matters most is the way the game is played. 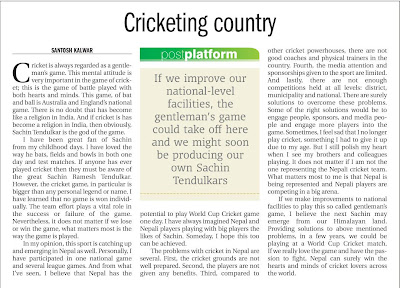 In my opinion, this sport is catching up and emerging in Nepal as well. Personally, I have participated in one national game and several league games. And from what I’ve seen, I believe that Nepal has the potential to play World Cup Cricket game one day. I have always imagined Nepal and Nepali players playing with big players the likes of Sachin. Someday, I hope this too can be achieved.
The problems with cricket in Nepal are several. First, the cricket grounds are not well prepared. Second, the players are not given any benefits. Third, compared to other cricket powerhouses, there are not good coaches and physical trainers in the country. Fourth, the media attention and sponsorships given to the sport are limited. And lastly, there are not enough
competitions held at all levels: district, municipality and national. There are surely solutions to overcome these problems. Some of the right solutions would be to engage people, sponsors, and media people and engage more players into the game. Sometimes, I feel sad that I no longer play cricket, something I had to give it up due to my age. But I still polish my heart when I see my brothers and colleagues playing. It does not matter if I am not the one representing the Nepali cricket team. What matters most to me is that Nepal is being represented and Nepali players are competing in a big arena.

If we make improvements to national facilities to play this so called gentleman’s game, I believe the next Sachin may emerge from our Himalayan land. Providing solutions to above mentioned problems, in a few years, we could be playing at a World Cup Cricket match.
If we really love the game and have the passion to fight, Nepal can surely win the hearts and minds of cricket lovers across the world. For those like me, over-exposed to the old school tie, summers in heart of Chitwan and fascinated to hear latest news on Cricket commentary, cricket was always more than a game; it won't be wrong if I say we were eating, sleeping and drinking cricket, it was a way of life and the most worthwhile contribution of a much-reviled Empire. It was a self-fulfilling world which encapsulated robust values, from strategic thinking to fair play. My childhood cricketing heroes were those who combined skill and elegance with lordly amateurism - 'gentlemen' like Richie Benaud, David Gower, Sunil Gavaskar and Sachin Tendulakar.7 years ago, I even made a to National level competition held in the Kathmandu - the summer retreat of the redoubtable Kathmandu weather was awesome. It was a small homage to an age that is long gone, when money was never discussed in polite company and gentlemen who were involved in the game had private incomes.

It seems that we are developing together as a team; we are into news by the name of gentlemen game. Seeing at neighboring country India and its team it seems that in days to come, there will be more populist outrage at the effrontery of investing in Indian cricket Rs 6 crore in M S Dhoni when indebted farmers are committing suicide next door in their land. Eyebrows will also be raised at the logic of ignoring promising Indian talent for foreign has-beens. But Why, yet others will ask, are we not putting all our eggs in the cricket basket? Surely football, Karate and marbles deserve a break. Everyone has some gripe about a perfect free market. Pandering to popular tastes is held to be ''common''; it offends aesthetic sensibilities. A free-marketer I know, for example, was livid when great football players was awarded the National honors. Why can't we do the same for Nepali Cricket Players?

It is worth investing money on Nepali cricket as it takes the brand name of country and culture it presents in global world. We can even see the progress we are making by entering Final of U-19 Plate championship. What some people view as debasement, others regard as opportunities. Till the World Cup in South Africa showed the way, few people appreciated the potential of 20-20 cricket. Today, every impresario worth the name believes that this shortened version of the game constitutes the future in a hurried world. And if Mallika Sherawat doing an 'item number' to celebrate every lofted shot into the stands livens proceedings further, what's the harm? It's good capitalism.

The Cricket Association of Nepal (CAN) should actually only be tangentially about cricket. It is doubtful during my existence whether Wisden will even record the scores of the Kathmandu versus Chitwan encounter, nor will club loyalties develop instantly. We need to take the initiatives as soon as possible. Russian billionaires buy football clubs in Chelsea and mansions in Hampstead to signal their coming of age. In Nepal we have not done anything till date; as a cricket reactionary, I mourn the tinsel-isation of a way of life; as a nationalist I salute those who had the audacity to think big.

Who cares if the whole thing is very bling - the hallmark of the arriviste? What matters is that cricket now should belong to Nepal. Or at least we can think of making it our national pride, certainly in near future.